#s1prayer covered subjects as diverse as hunger, town planning, closeness to God and Pet Shop Boys lyrics. The tweets were retweeted as far afield as Bolton and Loughborough!

In December 2011, we turned the Christmas season into a multi-site art project with Advent Shrines.

24 boxes appeared day by day across the city centre, each one by an artist challenged with the task of reinventing advent for contemporary culture. The project encompassed 35 locations and people in the city.

In October 2011, Sanctus 1 ran the first ever church service for Manchester Science Festival.

The celebration of God and science had large looping graphics, experiential ambience, a thoroughly modern communion and especially-edited ‘visual hymns’.

Tales from the Aquarium

In August 2011, we launched a short story project in which crochet fish were distributed at the Greenbelt Arts Festival.

People who found the fish were encouraged to take a picture of their stitched sealife and submit a story to go with it. The fish have ended up all over the world. 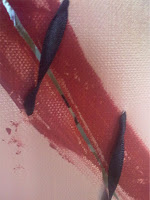 In April 2011, Sanctus 1 explored scarring and perfection as part of the Spirit Of Life exhibition.

The meditative service involved simple on-stage choreography centred around a ritual of a flesh-coloured canvas being sliced open then stitched together again.

Sanctus 1 is an inclusive and creative Christian community exploring spirituality in the heart of Manchester's Northern Quarter.

Explore the rest of the site to find out more about why Sanctus 1 does what it does, what's coming up next and what projects it's been involved with in the past.